Menu
Log in
Register
Install the app
You are using an out of date browser. It may not display this or other websites correctly.
You should upgrade or use an alternative browser.

Test fit wheels and tires. I have only found my front tires. Rears on order still. So I mounted the fronts on the front and rear to see how large the flairs will be.

The rears will be 2-1/2 wider than pictured.

Looks like front flairs will be 3" minimum and rears will be 4"-5" wide. SWEEEEEET!

You definitely have a good eye for it.

Well I could not wait till 2022 for the rear tires that match the front tires. So I went with what was the size I wanted, just not same brand. I had to have the tire so when I get the 4 link, coil over, brand new John's Industries 9" Ford rear end in, I will have the right tire to build the rear flairs to.

I have ALL the suspension parts in now. So there are no more excuses to not get rolling full steam ahead. In all these boxes on the floor are $10k worth of under car parts. Complete, NEW, front and rear suspension sub structures. Double adjustable coil over shocks, frame connectors, 12" rotors front and rear, new spindles, 4 piston calipers.

All I have done inside the car is cutting into the seat structure box area and clean out all the debris and rust. Welded a 2" square patch in one spot. Painted over all the rust and then made screw in, removable cover plates to close it back out.

Definitely gonna need some to fab some B I G A S S flairs. Lol.

Well, finally got started pulling the rear end and leaf springs out so I can start the rebuild of the suspension tie in mounts.

The first issue removing all this was the bolts in the rear mounted the aftermarket mounts from outside direction. Some how they got a bolt in that won't come out without hitting sheet metal before it comes out. So we had to torch that bolt off.

Then we cut off, twisted off the front leaf spring mount boxes that were only held on by a few real bad welds. Once off I could see just how bad the frame area behind these mounts was. So I fabricated doubler plates to weld over the frame for strength. I chopped one of the mount boxes up to fabricate the plates to replace the removed OEM leaf spring mount that were located on the outer area of the frame originally. Why they cut these off when they did not inter fear with the crap they put on the other side of the frame is beyond me.

So we got the leaf springs off and out along with all the mounts. Then we removed the tires which we had left on to support the rear end upon spring removal. Once the wheels were off we were discover a tin sheet metal plate wrapped around the bottom and outer box frame section. This was pop riveted on with 8 aluminum pop rivets and had been under coated. So I drilled off the tin plate. WE WERE HORRIFIED by what we saw under the tin plate!


Some DUMB A S S in the past decided to CUT AWAY 75% of the rear sub frame tubing during the inner wheel well removal. Basically, the only part of the rear frame holding up the car was the inner surface of the rectangle frame tube. A slight edge was on the top and about an inch of the bottom portion was still there. Both sides of the car were done like this. WOE!

This was such an unsafe modification, had the previous owners put it on the road, some one could have suffered from a catastrophic failure. OMG!

So I decided that my repair would consist of replacing the missing material by installing a section of rectangle steel tube with an 1/8" thick wall. I went to the local steel warehouse that has a great supply of drop material on racks in their small show room / sales office.

I found some 3" x 1-1/4" x 1/8 wall tubing drops. Once back I cut them about 3 inches longer than the missing portion of the frame. I then slid them inside the remaining sub frame. Looked like it will work. So I removed the tubing which was about 1/8-1/4" narrower that the frame tube. I then slit the frame tube at the top and bottom about an inch back so once the new tube was in I could fold this section down onto the new tube surface and weld it all in. This worked great, but what a PAIN IN THE ARSS!

What else are we going to find that's so wrong????

So we got the repairs done and got the then used the new rear ends 4 link bottom trailing arms to locate and weld in the new replacement brackets we made to re install to chassis in the OEM position.

So the next step is to get all the repairs welded in 100% and clean and dress it up with new paint and undercoating. Then we can install the lower links, then the rear end housing and mounts to these links and can locate the coil over spring mounts and upper trailing links. What a pain in da butt! Lol.

So basically we rebuilt the entire rear suspension tie in points and repaired the frame sections that were HACKED OUT so we can now attach our new components in this repaired area of the frame. Yep, the damaged/ removed sub frame is right where the new rear suspension is to tie in to mount the coil over springs to.

SO this took an hour job and turned it into a 10 hour day. Lol. 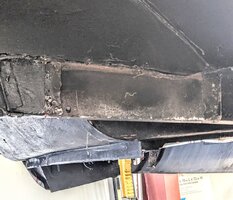 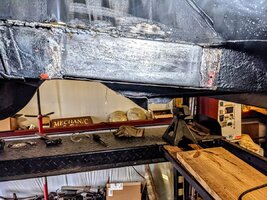 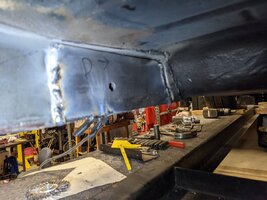 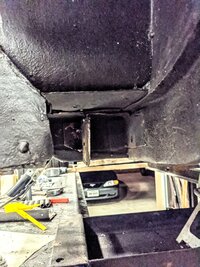 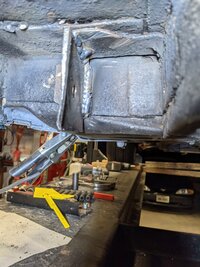 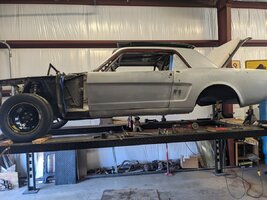 Finished up welding on the replaced OEM rear leaf spring forward mounts. Installed the new rear trailing arms. Assembled the rear ends mounts for where the trailing arm attaches to the rear end.

Got the coil overs attached to same mounts. Started fitting the upper coil over mounts bar.

That's when the provided mounts for the cross bar don't even come close to fitting the mangled sub frame the previous owners left me. Lololol. Errrrrrrr.

Yep! It looks like that at some point in it's life, the car took a hard rear hit. So the sub frame is not even near a straight rectangle tube anymore. The saddle type mounts will not slide over the frames. So I have cut off the back side of the u shaped channel mounts which basically turns them into l angle mounts. Once located I will go back and weld the removed portion back on. I am also adding some bolts through the frame for fit. Once it's all in I will weld it all in to frame rails.

Soooooo that was my 4 hours worth today. 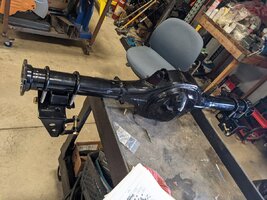 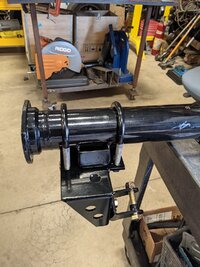 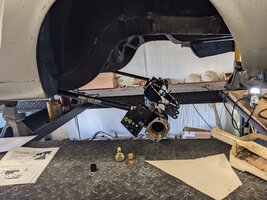 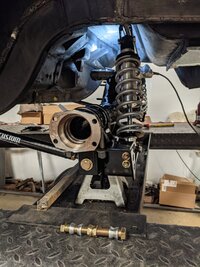 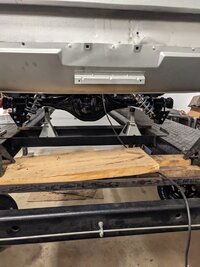